The issue of housing, personal security and the fragility of life became very real to me this week. I met with several senior constituents who are struggling to make their housing payments, maintain their property and handle normal repairs. I wonder how seniors on fixed incomes can handle a leaky roof, an aging boiler, or a driveway that needs repair? Social security and relatively small savings/IRA’s/pensions aren’t always enough to handle the cost of living. Uncle Sam might increase our monthly checks by 1% a year. It isn’t enough… not even close.

The most frequent calls I receive are from seniors seeking guidance as they grapple with the reality of keeping their homes. That’s why I support seniors being considered for property tax breaks. I am also a strong supporter of Attleboro’s Council on Aging/Senior Center.

If you know a Senior in trouble, suggest they call one of our social workers at the Senior Center on South Main Street. They will find a friendly, caring ear and some sound advice. If you know a Senior who needs to give up their home (a truly sad event) then the staff of the Senior Center will offer sound advice. I don’t want anyone to lose their home.

In the last census, we discovered that there were 8,000+ senior citizens living in Attleboro. I’ve been advised there might be 14,000 seniors in Attleboro by the time our next census is completed. Jan and I are among that group.

We need to cherish and help our seniors. With good health, we shall all be Seniors one fine day. 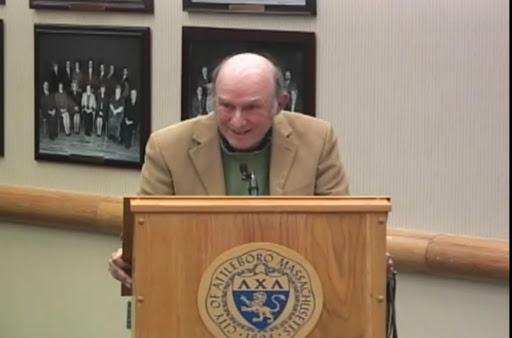 Last night I heard seniors tell the city council how much they wanted to keep their homes. It wasn’t easy to pay their bills but it meant so much for them to continue living at home, despite fixed incomes and their physical aging. The council never asked a question and everyone appeared to be intently listening to the residents who spoke. I was proud of each speaker, pouring out their hearts to give a small break in their neighbor’s property taxes. They didn’t want anyone to lose their homes.
I waited almost an hour before speaking.  So I listened while I waited for my turn. The love for their homes, families, and for Attleboro was amazing to witness.
Finally I spoke. I told the city council that a lot of people are scared. I asked the council to lower our property taxes a bit. We all need some help while we begin paying for the new high school.
I was very proud of our city last night. Everyone in the council chambers shared their love for Attleboro. No one disagreed. It was a powerful night.
I believe the city council heard every word. I believe the council will reach out a helping hand to those in need.
Regards,
ty
FULL CITY COUNCIL 11/13/18 – https://youtu.be/8SwuRrM5l3U (Courtesy of DoubleACS)
41.944544 -71.285608 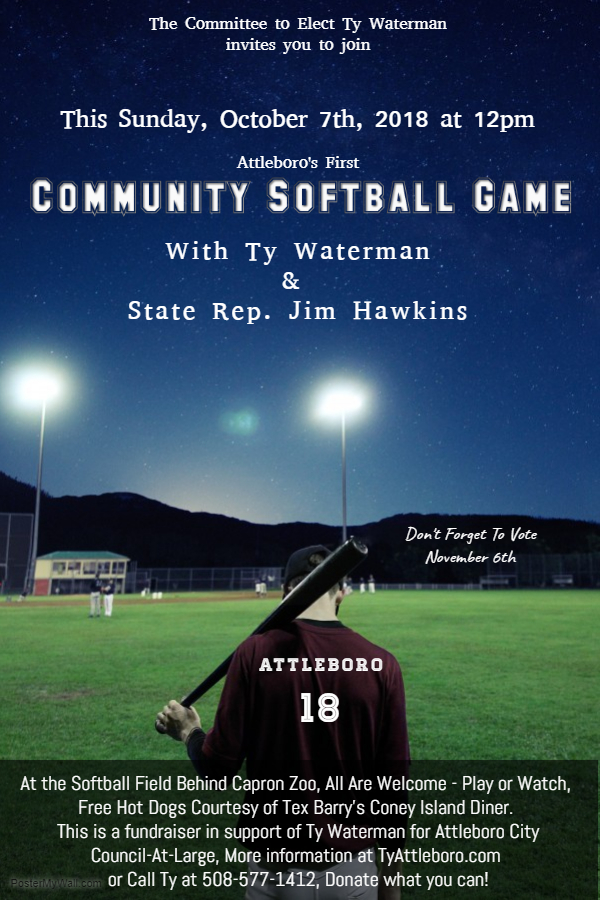 1. The past two days in Ward 5A have really been fun. (5A is the area immediately South of the center of the city.) I was invited to put up signs in front of four homes on East Street, one home on Union Street and James Street. Everyone I met was enthusiastic and gracious. It was a humbling experience. One of the highlights of our campaign.
People are concerned about seniors housing. Today, an elderly man told me he’d owned his house for the past 75 years. He’s afraid he’ll have to give it up because of rising property taxes. Attleboro doesn’t want anyone to lose their homes.
We will find a way to help seniors live in their homes as long as possible. If Houston, Minneapolis and other cities around the USA can give their seniors a break…. so can Attleboro!
Jim Hawkins is working on several bills in the state house to give seniors hope. I will support our seniors when those bills reach the City Council.
Meanwhile, our children need smaller classes. If we can build a new high school we can certainly figure out how to reduce the class sizes. I am constantly meeting students who are lamenting that their classes are very crowded. Are we listening to them? What are we communicating to them?
To help seniors and children we need more revenue. Our proposed new Economic Development Director could help by attracting new businesses to Attleboro.
2. I stopped at East Street to look at my map when a car with two ladies slowed down next to me. The passenger leaned out the window and asked if I was a census worker. I smiled and handed my palm card to her. “No, Ma’am, I’m hoping to be a city councilor.” She laughed, took my card, and told me to knock them dead in City Hall. Off they drove.
41.944544 -71.285608 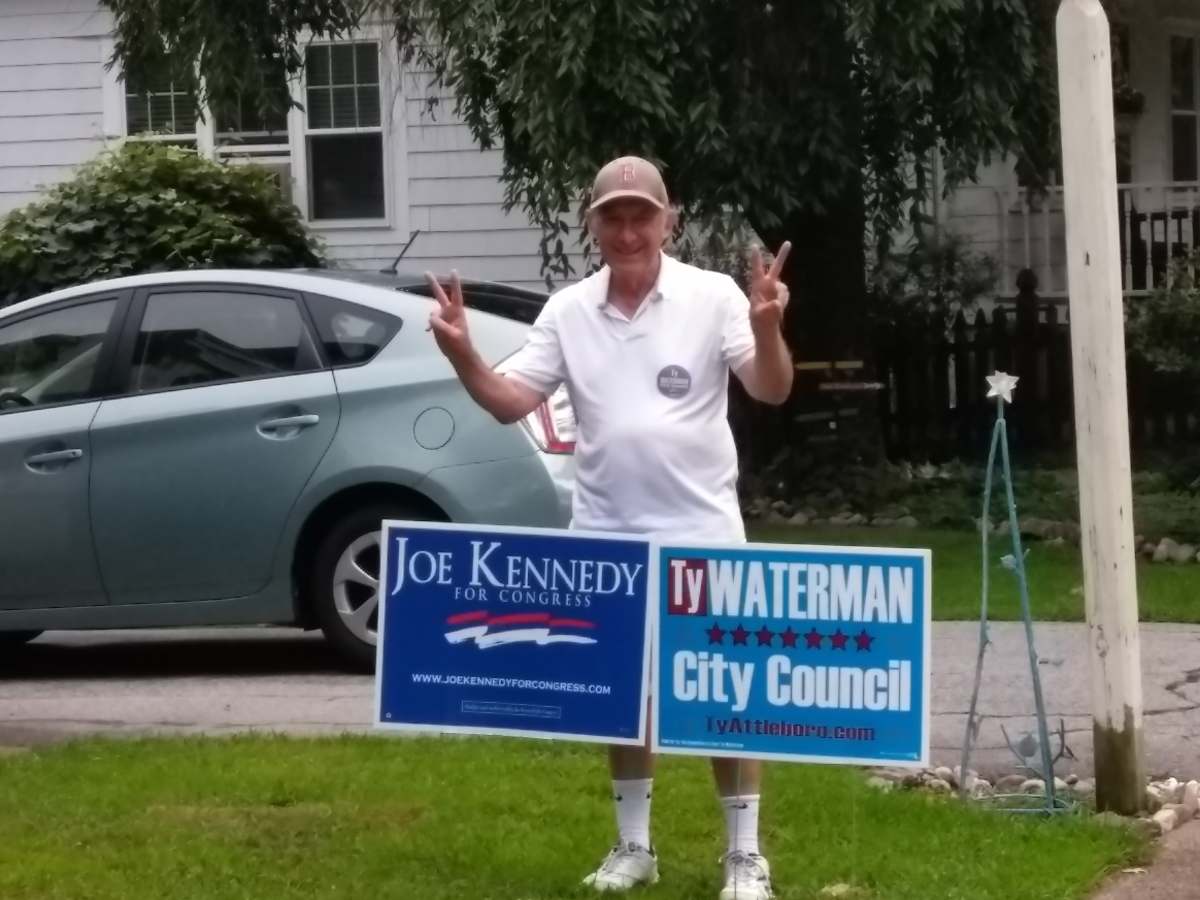 1.This is the week my beloved Red Sox will clinch the Eastern Division vs. the Yankees. How fitting that my first experience today in Ward 5A (off South Main St.) was about baseball? As we were inserting a pair of signs at the corner of Mulberry and Lafayette St., a man walked by and told me he enjoyed my book about the 1918 Red Sox. His then 15 year old daughter had given my book to him almost 20 years ago. I signed the book for Steve last year at the Attleboro Community Theatre.
We ended up talking about some of the players of that long ago deadball era. This wasn’t Attleboro politics but it resulted in my putting a sign in Steve’s yard. Great way to start the day.
2. Jose and I met in front of his barn on Pine Street and had a conversation about the Attleboro dump. Jose pays his taxes, which takes care of his weekly trash. Jose feels the dump should remain free. He loves Attleboro. Originally from Portugal, Jose wants his grandchildren to be fluent in both English and his native language. Jose thinks our schools should be teaching several foreign languages at a younger age, instead of simply offering Spanish in High School.
3. Sara on Dunham Street introduced me to Brent, her nine year old son. Brent can hear the teachers better than in the open class he had in fourth grade. He loves doing math. Sarah (Mom) and Brent are delighted he finally has a classroom with real walls.
4. While biking up Park Street towards Sturdy Hospital, I had the good fortune to meet Brenda, who suddenly appeared at her front door. She has a strong feeling for the homeless of our city. Brenda hopes we eventually have a family homeless shelter so struggling families can have a sense of security and warmth. Brenda actually grew up in a shelter on the North Shore of Mass. She wonders if Attleboro residents realize we do have a homeless population. As I left, she mused, “I will suffer for our homeless till the day I die.”
5. While heading back to my car, I stopped my bike in front of a quiet house on Parker Street. I heard a voice from the leafy front steps. It was a middle aged woman bemoaning the fate of her 62 year old sister, who was in the house suffering from Alzheimer’s.  I suggested she speak to one of our social workers at the Larson Senior Center. She sighed again. Her sister wasn’t well and didn’t seem to be trying to help herself. She thanked me for stopping and listening. Wish I could have done more.
6. My last visit was to a past supporter on School Street. This senior lady wants the council and our mayor to get along better. She wants city leaders to be civil and respectful of each other. She wants leadership that does something positive. I was a little surprised when she looked me in the eye, and told me to put up my sign in her yard. Then she asked me to contact Jim Hawkins and put one of his signs up, too. I would be honored to serve her. She’s a tough cookie and a really good soul.
All in all, it was a good day in the heart of Attleboro. Ward 5A is our smallest precinct but a vibrant one.
Keep your chin up.
Ty
41.944544 -71.285608

A day well spent in the neighborhoods off of Pike Avenue in Ward 4B. One man told me he had a stroke five weeks ago and was found by the fire department’s rescue squad, First Responders. They treated him on site, hustled him to the hospital, and may have saved his life.
Following recovery, he went down to the fire station with dinner for the men who helped him. The firemen were surprised and told him they had only been thanked once in all the time they drove an ambulance to an emergency.
We talked about the importance of thanking city employees whether they be our police, firemen, social workers, librarians, park and recreation, or DPW workers. Everyone who works for the city of Attleboro is deserving of our thanks.

It was humbling to meet this gentlemen.